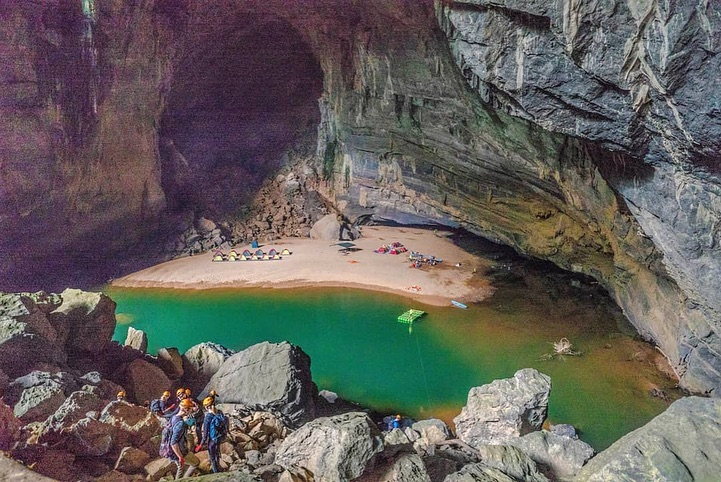 The year is nearly halfway done, have you got any plans to make your trip of the year? If not, here is an ultimate list of 8 spectacular destinations to challenge your Yolo spirit, whether you’re into thrilling adventures or craving a perfect getaway. Scroll down and get ready to embark on a lifetime journey to admire the beauty of Mother Nature.

1. Hunt the Northern Lights in Iceland

No matter what part of Iceland you go to, you’ll get the chance to witness distinctive colors in each season. Situated on the Atlantic volcanic belt, Iceland houses more than 30 active volcanoes, lava fields, hot springs, and bubbling geysers. And due to the Gulf Stream flowing close by,  the weather here can be quite harsh, but usually isn’t too cold.

Iceland is among the hottest destinations to travel in 2019 because of its fantastic landscapes and natural lights that have been featured in many epic movies, from Interstellar and the Martian, to the likes of Game of Thrones and even the Justice League.

The land of fire and ice is also famous for the largest glacier in Europe, as well as crystalline ice caves that can only be seen during wintertime. So in conclusion,  one of the best things to do in Iceland is to join a hunt for the Northern Lights above.

2. Norway – one of the most beautiful landscapes in the world

Norway is one of Europe’s most exciting and varied adventure-tourism destinations. A capital in the middle of nature – Oslo is selected for the European Green Capital of 2019 and listed by Lonely Planet as Best in Travel for 2018. Oslo is also home to some of the most awarded baristas, coffee brewers, and the world’s northernmost three-star Michelin restaurants.

Svalbard Islands are the huge island group in the northernmost part of Norway that takes wildlife experiences to the next level. Here you can participate in exotic, nature based activities all year around. The interior offers up wild reindeer, prehistoric musk oxen, ponderous elk (moose), or beguiling Arctic foxes.

In Tromsø, you should check out places like The Polar museum or the local Mack brewery established in 1877, or you can spend your time looking for things like whales, the midnight sun, or the northern lights.

Bergen – the streets of this capital are full of wooden, fairy tale houses with seven mountains as a backdrop. The medieval Hanseatic wharf of Bergen, with around 60 historic buildings in succession, is in the UNESCO World Heritage list and several foundations dating back to the 12th century.

One of the most famous sights in Norway is Trolltunga devil’s tongue – the terrifyingly beautiful cliff edge. You should visit the site during summer or late summer and be ready because it’s a 10-12 hour hike round trip.

3. Ladakh – the beauty of tragedy

Ladakh, which is located in the Himalayas within India’s national borders, is only accessible by road 6 months out of the year via two passes from Srinagar or Manali, or by air from Leh. Ladakh has immense desert terrain and snowy mountains, it is not the place for those who like to relax, but only for enthusiasts ready and prepared to explore.

Note: The best time to travel to Ladakh is from May to October because there is no snow and the roads are cleared. From November to April, Ladakh has heavy snowfall and the roads from Leh to many places such as Khardungla pass, the highest pass of the world (5,600 m), and Pangong Lake (4,300 m) are frozen and unable to accommodate travelers.

Pangong lake is located at a height of 4,350m and extended into both India and China. It immenses in size with crystalline jade blue water that reflects all of the scenery all around.

4. Come to the forgotten Turtuk Village in India

If you are looking to further get away from tourist crowds, Turtuk village might be appealing to you. Turtuk, which is the last village on the India-Pakistan border, is situated in the northernmost region of India in the Leh district of Jammu and Kashmir, 205km from Leh. It is a former landmark of Pakistan, but after the Pakistan-India border war in 1971, it belongs to India now.

The road to the village is remote and dangerous, but it has the views of the beautiful Shyok Valley, the majestic of massive mountains, the color of the sky, peaceful sceneries, a silent atmosphere, and the chilly air of the highland.

Turtuk is one of the few places in India where you can witness Balti culture and find a few homestays and guest houses in the village. Turtuk is famous for apricots, so you should try apricot seeds, oil, jam, juice and numerous other products that are made at the locals’ basements.

5. ﻿Immerse in the wonders of Jordan

Jordan is sandwiched between military disputed areas such as Syria, Iraq, Palestine, Israel and Egypt so it has discouraged travelers. Nevertheless, Jordan, a safe haven in a region of conflict, has delighted visitors for centuries with its World Heritage Sites, friendly towns, and inspiring desert landscapes, and it will change your mind about the region.

You will be quickly immersed in the history of Jordan, especially at the ancient city of Petra – one of the 7 wonders of the world. Walking through the Siq, the natural gorge that leads through red sandstone rocks to the vast classical Al Khazneh, you will see one of the most elaborate temples in the ancient Arab Nabatean Kingdom city – Petra.

The city of Jerash has Roman ruins with imposing ceremonial gates, colonnaded avenues, temples, and theaters that all speak to the time when this was an important imperial centre like The Oval Forum, Jerash Cardo Maximus, The Arch of Hadrian and more.

6. ﻿Discover the mysteries of Tibet

Tibet is located at an average altitude of 4200m above sea level with rough terrain, thin air, and an unstable security situation, but in return, the mysterious Tibet has many interesting things that are worth exploring. Tibet is the land of mesmerizing lakes, snow covered mountains, stretching fields, and sacred monasteries that help you find your peace and yourself throughout your journey.

Lhasa is a capital of Tibet placed at an altitude of about 3650m, and is one of the highest cities in the world. It is even called the holiest center of Tibet in Tibetan Buddhism. The city is the residence of the Dalai Lama, as well as some of the most sacred temples in Tibet like the Potala Palace, Tashilhunpo Monastery, Norbulingka Institute and more.

Located remotely in the west of Lhasa, Mount Kailash is a place very important to Hindus and Buddhists and is the destination of a pilgrimage for those devout enough to try and make the dangerous trek.

Wildlife, beaches, friendly people, fascinating cultures, Serengeti, Ngorongoro, Kilimanjaro mountain, Zanzibar Archipelago – Tanzania has all these and more wrapped up in one adventurous, welcoming package to the wildest of East Africa.

Kilimanjaro mountain is Africa’s highest peak and the world’s highest free-standing volcano. It is also home to the Chagga people, and to a wealth of birds and wildlife. Climbers by the thousands venture come here to challenge themselves on its muddy slopes and rocky trails.

Situated in Africa’s Great Rift Valley, Natron Lake’s bright pink waters stand out due to being supersaturated with salt. The lake gets its hue in the dry season as the water evaporates and the cyanobacteria in the lake photosynthesise.

Having a night at a campsite offers great opportunity to meet wild animals like deer, antelopes, etc. In the morning, you might witness flocks of zebras or elephants walking through. Camping in Tanzania is perfect for nature lovers and those who are looking for a break from civilisation, and gives visitors the chance to experience East Africa’s nature, animals, and cultures in an wildest way.

8. Explore the biggest cave in the world – Son Doong Cave

The cave runs for approximately 9km, is 150 meters in width and at times higher than 200 meters in height. It is punctuated by 2 large sinkholes, where the ceiling of the cave has collapsed. The sinkholes allow sunlight to enter the cave, resulting in the growth of trees as well as other vegetation.

The cave has its own forests due to the protection of the “Great Wall of Vietnam” which is 90m tall at the entrance,that has kept the flora and fauna inside the cave intact. The impact of temperature and humidity right inside the cave has made its own weather mode and even contains its own clouds!

Oxalis Adventure tours started Son Doong cave exploration tours in 2013 and remain the only company that hosts Son Doong cave expeditions in Vietnam. The tour has been voted among the top things to do in Vietnam and it is on the wish list of so many explorers around the world.

Each tour has a maximum of 10 guests to ensure safety and preserve the cave. Due to a lot of physical activities like jungle and mountain trekking, rope climbing, scrambling elevation change up to 400m, and river crossing, the tour requires the attendants have basic trekking experience and health suitable for these activities.

Tip from Inspitrip: Conquering Son Doong is not easy even for the most expert explorers. You can check out tours in other caves in the Phong Nha – Ke Bang cave complex that are less strenuous in order to give you a little taste of the region and cave complex before exploring Son Doong.